Petra means rock. It is a historical and archaeological city in the Jordan, near Amman, the capital of Jordan, famous for its rock cut architecture and water conduits systems. Established sometime around the 6th century BC as the capital city of the Nabataeans. It is now symbol of Jordan as well as its most visited tourist attraction. It lies on the slope of Mount Hor in a basin among the mountains which form the eastern flank of Wadi Araba, the large valley running from the Dead Sea to the Gulf of Aqaba. Petra has been a UNESCO World Heritage Site since 1985 and in 2007 it has become one of the Seven Wonders of the World. The site remained unknown to the Western World until 1812, when it was introduced by Swiss explorer Johann Ludwig. It was described as “a rose-red city half as old as time”. I visited Petra in the year 2009. I was stunned to see the unbelievable architectural site of the Treasury at Petra and other sites spread over four kilometers. I also visited places of interest in Amman and the sacred place where Jesus was baptized including the Moses Tomb. I also swam in the famous Dead Sea; the lowest point of the earth-experience is thrilling. 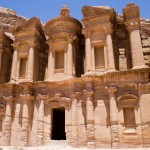 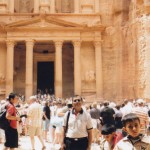 Great Wall of China » | « The Great Pyramid of Giza