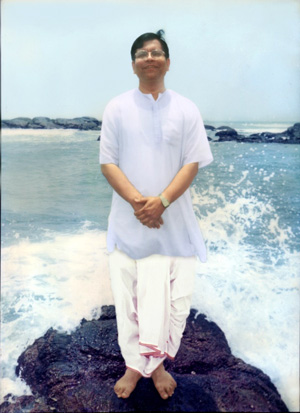 It is not John Bunyan’s ‘Pilgrim’s progress’, one of the three greatest allegories of the world. This narrative is about a world pilgrim and his progression since his infancy. He was born and bred up in lap of Mother Nature. She has always played a vital role in his life to become true worshipper of mankind – a philanthropist. His natural proximity with all beings and things alike finds a spontaneous echo in such memorable verses as “He prayeth best, who loveth best, All things both great and small”.

This World Pilgrim’s heart even in his childhood days loved to go with his elder brother to enjoy a holy dip in the sacred waters of the river Ganges near Naihati ferry ghats not far from KanthalPara renowned for the birth place of the Scott of Bengal – Rishi Bankim Chandra Chattopadhyay, creator of Indian National Song – ‘VandeMataram’.

When he was a student of the second form, he accompanied his father to Bangladesh (formerly East Pakistan) in his father’s native village, relished a unique experience that was absolutely Greek to him. Thereafter, when he was hardly a thirteen or fourteen years old boy, he became almost infatuated with the natural surroundings and he together with some of his companions actually called at Satjelia in the heart of openness of the islets of the Sunderbans. He had been there for five or six days at the safe shelter of his friends’ kinsmen.

When he was in the tenth form, alone he stepped into the hills of Darjeeling to visualize the spectacular sights and sounds of Nature that were writ large in the peaks of Kanchenjunga and other mountain tops. He visited Kanyakumari,satiated his senses to his heart’s content – brimful. Prior to this he was escorted by his parents in the holy JagannathDham, Puri,Orissa. There his heart was captured with magical profundity. When in college; his maiden foreign tour was in the neighboring State of Nepal in company with others.

This world pilgrim has always translated his inner urge into reality. Initially, by virtue of his father’s services with the Indian Railways, he travelled on different occasions. Next with the meager earnings from some private tuition, he ventured to go out on outings to broadenhis outlook. Thereafter as a Government official, representative and following his income from his legal practices, of course, with the assets of heavenly blessings, he has been in constant touch with the lands abroad. How he likes to sing Tagore’s universal music fully engrossed ‘My heart is never restless, and my spirit yearns for the infinity that exists in the remotest end’.

Being born in the decades of fifty, he is in the prime of his life – a veteran sexagenarian now. His sheer goodness together with his child-like innocence, sincerity and generosity has made the whole of the world a friendly one to him ‘VasudhaibaKutumbakam’ – nay , he is aptly called a world pilgrim – a world citizen.

His dauntless war against the oddities of life especially his uncompromising will-power against all sorts of corruptions, must be coveted. His philosophy of plain living and high thinking is quite apparent while embracing anybody in the so-called lowest rung of the society. All, irrespective of social status, are davids and jonathans to him.Besides, he is a great composer of music, literary, discourses, travelling accounts, ballads, minstrel songs and patriotic verses.

What is his true identity? Who is this world pilgrim? Unquestionably, he is Rupak to his parents and grandparents, Prabir to his unreserved soul mates, Dr. Rayto theprofessionals, Sri Prabir, Chankya to the innumerable readers of the periodicals – Uttisthata and the Spiritual world. The satyanusandhanis lovingly call this arch organizer ofthe Spiritual Society of India as Dadamani, Bhaida and their President.

Finally, it may be conjectured that through a just minute opening in our heart, he will kindle a ray of hope to mold us from ever pessimism to a universaloptimistic view which is evidently onlymessage of thisworld pilgrim – our true Friend, Philosopher and Guide.

(From the pen of P K Dutta-a friend)